A Glimpse Inside an Eating Disorder 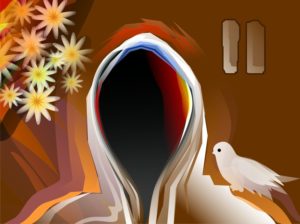 Oftentimes people with eating disorders talk about feeling like they are at war with something within themselves. It’s like they have an angel on one shoulder and a devil on the other telling them completely opposite things – “It’s okay if you eat that, nothing bad will happen” challenged by “How can you even think about eating that! You’re nothing but a fat pig!” The confusion builds and the eating disorder behaviors progress.

The following is an assignment I gave to one of my eating disorder patients who had been in therapy for about nine months. She was at a point in treatment from anorexia where she had started to gain weight, was having a very difficult time with body image and had tried to drop out of treatment.

I used to be able to call you my best friend, my only friend, the only thing I ever had. I used to fight to keep you in my life. But now I’m not so sure. I used to believe everything you told me I could have if I just listened to you and did everything you wanted me to do. You told me I’d be faster, but I’m not faster if faster is being sidelined, not only from my running but my life as well. You told me people will like me more, but is locking myself in my room or even in my head making me much of a person at all?

Sometimes when I look in the mirror and into my eyes I just see this huge empty void, no longer a sparkling, energetic, outgoing, caring, loving person; just space. If the eyes are the way to a person’s soul, to their life, then you took it. You took my soul and fed off it and made me into a monster. You turned everything that was once so innocent and free into nothing but trash.

Food to me is no longer nourishment, it has become a sign of weakness. It’s not there to make you strong, it’s only there to make you weak, at least that’s what you told me. But you’re wrong, because I quit eating and I’ve only gotten weaker not just physically but mentally as well. The only thing not eating made stronger was you! It wasn’t supposed to happen that way. I was supposed to keep the control but you took all that too. I don’t understand why, but you took everything and I don’t want this anymore ED. I don’t want to wake up every morning hating myself and punishing myself for eating or stupid little things.

I’ve given you so many chances to prove yourself to me and you haven’t yet. I’ve lost faith in you, everything so far has been lies, dark, cold, lonely, hollow, empty lies. I think it’s time to give someone else a chance, someone who’s supposed to be better than you – A LOT better. And even though I didn’t like her before you even came into my life and took her from me, maybe she’s changed. I’m curious who she is now and what she’s like, and even if she hasn’t changed it’s been a long time since I knew what she was like and I want to know. And I think it’s time for me to capture what once was mine, what was once me, and decide for myself if I like her. I want to live again and I want to try to live without you.

I don’t want to hold onto you anymore like a child does with their safety blanket. You’ve kept me from nothing but life and living and being happy. I need to let you go and I’d wish you’d let go too because this relationship isn’t a true friendship. Friendships are give and take relationships, but you’ve only taken from me, or what you have given me, heartache, pain, loneliness, is nothing a true friend would give someone.

I’m done with your stupid games, “eat a little less,” “oh, you’re almost there.” Well I never got near where you wanted me to because everytime I got there, where “I should be” changes. I’m done falling into your cold, lonely, dark, black hole. I can’t be sucked into it anymore, not if I want to be somebody someday.

You have done one thing for me though, you’ve made me a stronger person, stronger in the way that I can decide what to do with my body and my life. Well I’m using your own lesson against you ED. Well It’s my life and my body I can do with it what ever I please so get out of my life and stay out!!!! I don’t have to listen to you anymore either. I can listen to who I want and don’t have to listen to you. I’m an adult, I make decisions and if I choose to stop listening I will and I do. I’m going to listen to my heart now, I’m going to try to do what’s right for me.

Oh sure I’m scared and I know it’s not going to be easy, it hasn’t been yet. I’m not sure I was ready to move on before, but after Sunday I know better now. I know for sure you took all the control and I’m going to gain it back. Someday I will be 100% free of you and you won’t touch me again. I can look at being scared in several ways. I can run from it forever even though it’s impossible to run from change and it eventually catches you. Or I can face it and live and learn from it. I was scared about going to college. I was scared no one would like me, or I wouldn’t make it. Well look at me now I’m doing just fine here. Oh no, I’m not perfect. I don’t think I’ll ever be perfect — in your eyes, perfect. But I’m perfectly imperfect, I’m learning that now. That it’s okay to not be perfect and good at everything and that striving for perfection puts me farther and farther away from it anyway.

You’ve hurt me ED and you continue to do so. If we were friends you’d stop hurting me and try helping me instead. If you respected me and cared for me like you said you did, you’d accept my decision that we need to go separate ways. Because friends do that, they respect the other person’s decisions even if they don’t believe it’s right.

Right before my very own eyes I’ve watched myself disintegrate into nothing, all because I thought a perfect body would make everything better. I see other people having a great time and being cared for and I wish I could have a great time and be cared for too. And now that I’ve met people who do care for me and want to help, it makes me crazy, should I let them, do I deserve it, or is it all fake, are they just trying to be nice. I keep fighting you screaming those lies in my head that they don’t care, that I’m too ugly to be cared for and that I don’t deserve it. I’m not going to let you push these people away like you did all the other people in the past. I’ve been disconnected way too long. I know I can do this. And the days I don’t think I can, there are a lot more people who care and believe in me than I thought ever could.

And even if not another human being believed in me, two people still do. The little girl inside of me who, when someone told her she couldn’t do anything, did go out and prove she could, and God. He never stopped believing in me, He actually gave you to me to make me a stronger better person. There’s a quote by Mother Theresa that says exactly how I feel. “I know God will not give me anything I can’t handle. I just wish He didn’t trust me so much.” Well He does trust me and I need to believe in Him because you, a monster, took my life right from under my nose. Like a lion sneaking up on its prey then attacking and devouring it without a single breath, you too snuck up on me and attacked and devoured me.

I hate you and all that you’ve done to me, to my life, to other people I care about that I’ve met because of you. No it’s not a bad thing I met them, but it is bad that I met you. I hate you because now I am nothing but a food obsessed, appearanced crazed girl who has better things to do than listen to a monster like you.

I used to love you. I used to believe you were my everything, my only thing. That’s not true you know? There’s more to me than you, I’m not sure what yet, but I’m going to find out and someday I’ll prove it to you and you’ll be sorry we ever met. You had no right to take my life from me, and now it’s my turn to take the one and only life I’ll ever take as long as I’m alive, yours!! You’ve ruined me and I can’t let it happen any longer.

So now I’m going to ruin you and take everything you believed in, and if I die trying to kill you that’s just fine because I can say at least I tried.