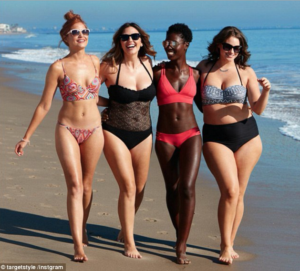 Is there anything that creates more anxiety and discomfort for women than having to buy, put on, wear and be seen by others in a bathing suit? It’s that time of year and millions of women everywhere are fretting or simply refusing to partake in fun in the sun unless covered up from neck to ankles.

I was talking to a woman in her mid 50’s who has never suffered from an eating disorder. She was telling me of a vacation she and her husband were on with three other couples. All of the couples have been married for at least 30 years and all four couples have known each other almost that long, yet when it came time to get in the hot tub at night, the women wanted all of the outside lights turned off! This is but one example of how ashamed women have been taught to be of their bodies — eating disorders or not.

Did you know that every photograph of a model goes through at least four hours of computerized transformations before it is published? No wonder we can’t get our bodies to look like theirs!! But do the publishers of magazines tell us that? Of course not. The advertisers in those magazines want us to keep trying to look like those models with the promises that if we buy their products and work hard enough, we can do it. All we end up doing is spending a lot of money and, in many cases, diminishing our self-esteem in pursuit of an ideal we can never attain.

“Body image” is the way a person perceives his/her body. Many people have completely lost perspective about what their bodies really look like for several reasons. One reason is that they focus only on body parts rather than on their whole body. Any time a body part is stared at without recognition that it is connected to the rest of the body, it is going to look distorted and usually bigger than it is. Anytime we comb over our bodies looking for imperfections, we are going to find them.

A second reason is that we constantly compare our body to other people’s bodies. This is an instant set up since we can’t look like anybody else! Our genetic makeup determines our height, shoe size, eye color, weight, etc., yet we compare bodies as if we were comparing luggage as it rolls off the assembly line. Why don’t we ever hear anybody say “I wish I could have a voice like hers” or “I want my ears shaped like that?” Probably because we know it is impossible. Unfortunately, we lose our objectivity when it comes to comparing stomachs, thighs, buttocks and body weight. Suddenly we think that we can make ours look like someone else’s!

A third reason why we have lost perspective on what our bodies really look like is that we have succumbed to the belief that thin is the only way to be happy. Since there will always be people who are genetically thinner than we are (just as there will always be those who are genetically heavier), we will always find them in a crowd and use them as “proof” that we are still too fat. If thinness is what it takes to be happy, why do those suffering from anorexia always want to lose five more pounds? Wouldn’t it stand to reason that, in their emaciated state, they would be the happiest of us all?

No matter what your weight, losing five more pounds won’t bring happiness, comfort, security or anything else you’re hoping it will. Your body is the way it is for today.  Go out and get yourself a new bathing suit and start living now. As you’re trying them on, remember that there is nothing wrong with your body. What’s wrong is those images of women who get four hours of computerized airbrushing and touch ups before we ever see them.