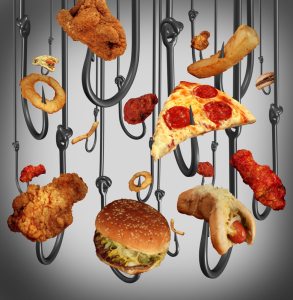 Binge Eating Disorder (BED) was recognized as a diagnosable eating disorder in the 5th edition of the Diagnostic and Statistical Manual, the guide to all psychiatric diagnoses, published in May 2013.  Prior to this, BED was frequently referred to as ‘compulsive overeating’ or ‘emotional overeating’ and was not recognized as the clinically significant and impairing problem that it is.

The symptoms of BED include:

■ Eating a large amount of food in a short period of time, notably more than most people would eat under similar circumstances;

■ Feeling unable to stop eating or control how much is eaten;

■ Binges are not followed by any method of purging or trying to “undo” the binge;

■ Binges occur at least once per week for a period of three months;

In addition, three of the following must also be present:

■ Feelings of disgust, depression or guilt after the binge episode;

■ Eating until physically uncomfortable and beyond fullness;

■ Eating large amounts of food when not physically hungry;

■ Eating alone due to feelings of embarrassment about how much is eaten.

Many people who experience BED also have depression, other mood disorders, trauma issues or substance abuse problems.  It is not uncommon for those with BED to be of higher weight, however, many are also within a normal weight range.  It is estimated that about 33% of people who enter commercial diet programs such as Weight Watchers actually have BED.  Because BED is an eating disorder and not simply a ‘weight problem,’ dieting can make the disorder worse and result in more significant rebound binge episodes.  Weight gain after a period of dieting is also a common pattern.

Treatment is effective and an essential part of recovery.  Psychotherapy should start with a comprehensive eating disorders assessment and then, at minimum, focus on identifying the triggers and feelings underlying binge episodes, changing the belief systems developed about food, weight and body image, developing effective coping strategies to replace bingeing and identifying and treating any co-occurring disorders.

Nutrition counseling with a dietician who specializes in eating disorders is also a critical part of recovery.  Learning what balanced eating with a meal plan is compared to dieting, reframing the diet mentality, moving toward an intuitive eating style and learning to eat for health versus for weight are all important aspects of recovery that the dietician is integral in supporting.  Other professionals, such as physicians and psychiatrists who do not engage in weight stigma, may also be part of the recovery team.

BED is nothing to be ashamed of, it is a problem that can be treated by qualified eating disorder specialists.  We’re here to help!