ED is in My Car – A Recovery Metaphor 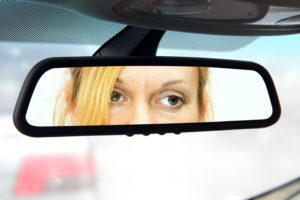 The following is a metaphor one of my patients has been using to understand why she can’t let go of her eating disorder. Carrie is in her mid-twenties, has a master’s degree, a good career and has suffered from anorexia for about six years. She has been in treatment for two and a half years, has made great progress but hasn’t been able to gain the last few pounds that would put her in her normal weight range.

She’s been frustrated with why she is stuck when she’s so close to the last stage of her recovery work. She came to therapy one day and brought the journaling she had been doing. Her use of metaphor was very creative and something I thought many working through recovery could relate to:

Why is ED a guy? I think because I was hurt by guys and this got my eating disorder started. I think it would help getting that hurt and anger out!

ED provides a sense of someone there, yet keeps me lonely because no one comes in.

I drive my car fast so that no one sees who is in the backseat. I am in control of the car, but he tells me where to go. I wave to people, even slow down for some, but I don’t open the door. For some, I’ve let them open the door and start to get in, but then I start to pull away so that they don’t see ED. Otherwise, I just ask them not to look in the backseat.

I let my friends in – Sarah, Christy, Emily, Jamie, Susan. They see ED and I try to tell them about him, but it is very hard to understand ED’s qualities and the hold he has on me. Also, they do tend to focus more on me than ED. But I do ask them to then leave the car so ED and I can be alone. They crowd in the car and they know he’s there; there is no pretending even though I am me, trying to be me, there is still ED’s presence. They deal with him but I know they and I would feel better if he wasn’t taking up room.

I need to stop the car, not even talk to ED, and drop him off somewhere in the boonies so he can’t come back.

Along my way I need to slow down, let people come in for a ride, maybe stretch out in the backseat and enjoy the ride. They can get out and I can leave them knowing that no one is in the car with me now, but that won’t and never has lasted for long. There has always been someone needing a ride and I always like to offer rides.

I have a lot to offer. My Jetta isn’t perfect, but it is me, gets me where I need to go and some people really prefer Jettas. I won’t search for ED. I may drive along at times and see his face or he might even be there to get picked up. But it is done. It is OK to let friends go. The hurts outweigh the comforts and ED’s comforts actually hurt later on. I will drive on by because some people I just don’t pick up.

I have to realize that ED excluded me from friends. I can’t go back. I need to focus on right now and not let ED dictate to me anymore so I don’t have any more regrets!

I can’t believe I asked him to get out! Right now ED is outside my car, jogging beside it asking me to let him back in for a ride. I am driving now, but only going 35 and it’s hard to keep from letting ED back in when I don’t have a friend or a destination to distract me. I need to keep my eyes straight ahead, turn up the radio and keep looking for the road signs that tell me I’m on the right path. I sure as hell hope that when I reach my destination, ED will have lost his grip on my door. I need to pick up speed by committing to do the things I am afraid of.

I’m scared because I have never not had anyone in the backseat and this means change. ED is still outside the car. I’m going to go 45 now and not really think about ED, but about other issues that come along. The backseat is free and open yet I am scared to let people in the car, meaning people that don’t know about ED.

I’m not so scared about whether they’ll like me without ED, it’s the fear of being disappointed. What if this is as good as it gets? Rejection can hurt and I have been rejected. I feel no sense of belonging. Some is due to me keeping people out and some is due to being in a transition with where I live and work. I don’t belong at home anymore because I’ve been gone and I don’t belong where I live or work because I haven’t been there long enough. I don’t belong to anyone in the romantic sense.

I guess I’ve always felt lonely and I’d rather be lonely with ED then let him go, and that sucks. Should I let him go and find out everything wasn’t what it was cracked up to be? I have such high hopes, yet the ‘what if’ keeps me back even though I know better than that.

What do I need to do to connect to people more? To belong somewhere? I know my recovery depends on figuring this out. I need to let ED stay by the roadside while I drive into the sunrise of a life without him.