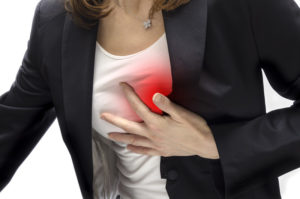 It has always been thought that heart disease is a man’s problem, but it kills a half million women every year and the number is growing. Heart disease kills more women than men and women are more likely to have a second heart attack within a year of their first one. Because women’s symptoms can present quite differently than men’s — fatigue, shortness of breath, sleep disturbances, anxiety, indigestion, upper chest discomfort — women often minimize them and write them off as stress. Female patients may procrastinate seeing their physician because “it’s nothing, it will pass when things calm down.”

Even if the symptoms are ‘just stress,’ the body is obviously responding with signals that something is wrong. Stress in not taken seriously as a health threat because, like multitasking and dieting, it has become part of our expected daily existence.

It is more commonly known that women are at higher risk for heart disease and heart attacks during menopause because estrogen levels drop and estrogen is thought to play a role in the health of arteries. Less commonly known is that stress affects the ovaries. This means that premenopausal women who have menstrual irregularities as a by-product of stress may have low levels of estrogen for years before menopause. This puts them at high risk for developing atherosclerosis (arteries narrowed by cholesterol build-up) because they lack the estrogen that helps protect arteries in the twenties, thirties and forties.

Typically, women have more responsibilities to manage between work and home, but studies show that women tend to feel they have less control at home and in the workplace than do men. Research supports that a strong sense of having control in our lives is critical for our health and emotional stability. The stress of feeling out of control can result in high blood pressure and high cholesterol, two major risk factors for heart disease.

Women in recent decades have been raised to accept that they should be highly educated, maintain a successful career, have children who are academically and athletically gifted, have a home ready for the Tour of Homes at any given moment and be happy and satisfied with it all. Yet, what we’ve got is women in their thirties and forties who are exhausted, pushing the limits of physical and emotional health and preparing their bodies for an early heart attack.

What are all the things you think you ‘have to’ or ‘should’ do versus what is truly important and necessary:

Do your children have to be in three sports?
Does your house have to pass the white glove test everyday?
Do you have to say ‘yes’ to everything?
Do you feel guilty about asking your husband, children, coworkers, etc., for help?

Is it critical to live in a house mortgaged to the hilt that you don’t spend much time in because you’re working 60 hours a week to pay for it?
Are you trying to take care of your sick parent(s) or spouse all by yourself because you’re the only one who can do it right?
Because you don’t have a weight problem or high cholesterol and you exercise do you think you’re safe from the effects of stress?
Are you ignoring the signals your body is giving you because you have too many other things to do?

It can be very difficult to take a hard, objective look at the lifestyle you have ended up living, but the things you do every day will either contribute to your good health or support the progression of poor health, including heart disease and early death.

It’s never too late to change the things having a negative impact on your physical and emotional health. Take the risk factor assessments on our website at www.heartandmindmatters.com to start identifying where you can make the changes that will make a major difference in your quality of health and life.