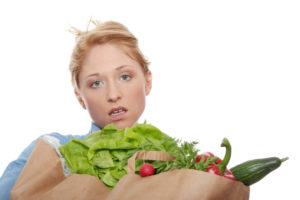 “Orthorexia Nervosa” is an obsession with eating the “right” foods or the “healthiest” food for the purpose of optimal health. It begins with an enthusiastic interest in following a stringent dietary practice, such as vegetarianism or raw food veganism. It is not that these diets cause orthorexia. Rather, when these practices are taken to extremes, disordered eating, eating disorders and other psychological or physical problems can occur.

Steven Bratman, the physician who coined the term “orthorexia nervosa,” was practicing alternative medicine in the 1990’s when the trend was to try and improve health through various diets in place of using medication. His patients would frequently ask him what foods they should eliminate and they would try theories like the Macrobiotic, Candida or Blood Type diets, which did nothing to make them any healthier.

Dr. Bratman was aware of the dangers of trying to eat too healthy based on his own experience with orthorexia while living on an organic farm in the 1970’s. He knew some of his patients were going to extremes and that it was more important for them to relax the constraints they were putting on their eating because their health was suffering from trying to be too healthy.

Because of the restrictive eating patterns, orthorexia nervosa can look like the eating disorder, anorexia nervosa, but there are some distinct differences:

Anorexia and orthorexia can co-exist and are a dangerous combination of disorders to have. Someone with anorexia can also develop extreme beliefs about what they can or cannot eat in order to prevent cancer or heart disease, for example, even though they are already underweight and think they are fat. Conversely, someone with orthorexia may get so restrictive with what they eat in their quest for optimal health that their weight drops significantly and they develop fears of eating and gaining back to a normal weight.

Those at risk of developing orthorexia are those who:

If you recognize any of the risk factors or the following signs in yourself or someone you know, getting an eating disorders assessment will determine whether the intention to be the healthiest is leading down the opposite path:

Orthorexia is a treatable condition. Make sure the clinician is an eating disorders expert. Always investigate the credentials of someone who claims to treat eating disorders. Don’t just take their word for it – your life may depend on it!

To learn more, watch this woman’s story about developing orthorexia:

Check out the video link on the homepage or ‘LeesPsychological’ Youtube channel for “Mental Health Minute” videos on this and other related topics.