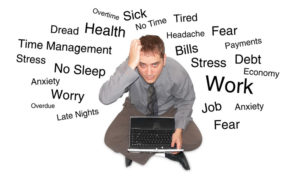 “Look, I own a business. I work 65 to 80 hours a week and I’m barely making it. I race around constantly just to keep the customers I have.”

“No, I don’t really have a social life anymore. I have one friend and he’s a great guy, but he’s not what I would call a big talker.”

“I’ve gone on one vacation in the past seven years and that was for a total of 38 hours. I can’t tell you how many times I’ve been on my way out the door and a customer calls and that’s it; no more vacation.”

“Financially it’s been real rough. I own a house but I’m renting it out. I’ve been living in my parents’ basement.”

“I don’t know why I keep working so hard for basically nothing. I have no life.”

“I don’t care what anybody says. I guarantee I’ll be back out there in two weeks even if I can’t do it myself and have to sit on a chair and tell somebody else how to fix the problem.”

These are the things I was hearing from a 41 year old man who was in the hospital waiting for open heart surgery. He had no prior health history but was a smoker, a workaholic and spoke with an angry edge to his voice. He had a massive heart attack with no warning, one that should have probably killed him.

Here is a young man who is overworked, does not like his job, is financially strained, lives in a basement, has no social outlets and no time for relaxation. He has just had a life threatening heart attack and is waiting for open heart surgery. Yet, he is determined to be back on the job he despises two weeks after surgery.

Other than smoking, he didn’t have any of the typical risk factors for heart disease. He did however, have a number of the psychological risk factors that are gaining greater recognition – workaholism, poor quality of life, chronic stress, lack of social support and inability to relax.

His heart is now significantly damaged, but it did for him what he couldn’t do for himself. It made him stop, rest and put himself before his job.

As we talked about his lifestyle and how it contributed to his heart attack, it was clear that this was a sad, lonely man who really didn’t have many people in his life to support him. He was coming to the realization that if he continued to live the way he had been “I’ll be dead in 10 years.” It seemed like he was so stuck in the rut of doing the same drudgery day in and day out that, on his own, he didn’t stop to consider whether he was happy, fulfilled or involved in living a life that brought him satisfaction.

We talked about options – what he could do about his business, career, living situation, house and social life. We didn’t come to any great conclusions or decisions, but I don’t think we had to. Our conversation got him thinking about things he doesn’t think about and helped him realize he has choices if he wants to live past 50.

I recommended that he strongly consider starting psychotherapy when he returns home in order to deal with his physical recovery, talk through the major lifestyle changes he’ll need to make, have an objective listener help with decision-making, deal with stress and modify his workaholic ways.

I expected to hear that he didn’t need that, but was pleasantly surprised when he said getting therapy would probably be a good thing for him to do. His heart initiated the need for a lifestyle overhaul, now it will be up to him to take it from here.